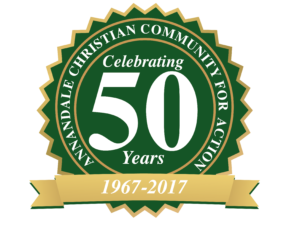 It all started in March of 1967 when federal regulations deemed that 13 children — 4 of whom were African American — were no longer eligible to receive subsidized day care because their parents’ income exceeded the federal poverty level.

Distressed about the plight of the children, community activist Fred Ruffing, president of the Higher Horizon Day Care Center (housed at Mount Pleasant Baptist Church), vowed to do something to help these families. His first stop, with his wife Emily, was a meeting at Peace Lutheran Church with ministers and laypersons from eight Annandale area churches. These churches pledged money to help place the children in new day care centers and appointed a day care action committee to find places for the children.

However, despite the funding support, they were not able to place all the children, since only two of the centers contacted would accept African American children, and they were full. In addition, the fees at many of the centers were too high for the group’s limited resources.

It became apparent they might have to start their own day care center — a daunting prospect. But they were determined to “do what Jesus would do.” Out of that determination, and with that guiding principle, the Annandale Christian Community for Action (ACCA) arose.

John Calvin Presbyterian Church volunteered to let ACCA use its building for the center. The group received a grant from the County of Fairfax and participating churches, which now numbered 12, helped with funding. ACCA was incorporated in November 1967 and held its first meeting at St. Alban’s Episcopal Church in December 1967.

The ACCA Day Care Center officially opened on January 3, 1968, just ten months after Fred and Emily first met with the ministerial alliance. The center opened with an enrollment of 32 children, paid staff, a small bus, “and great joy in the hearts of the Christian lay people who had succeeded in transforming their faith into action.” Parents paid tuition based on a sliding scale, depending on their income and family size.

The day care center remained at John Calvin Presbyterian Church until 1977, when it moved into space that had been occupied by the closing Annandale Elementary School at 7200 Columbia Pike. The ACCA Child Development Center (CDC) remains there today, with a staff of 60 employees to watch over and educate close to 200 children. It is proud to be widely acknowledged as a model program for early education.

Source: “ACCA: Helping Others Since 1967” by Kay McKinney and research done by Steven Lusk of Saint Alban’s Episcopal Church.